The seventh China Business Summit in Auckland – jointly presented by NZ INC. and Auckland Business Chamber – carried the beguiling theme of “The New China Paradigm.” In a full house of 500 delegates, it didn’t take long for the summit to warm up.

New Zealand Prime Minister Jacinda Ardern, two former prime ministers and the Chinese Ambassador quickly laid their cards on the table about the way the important bilateral relationship should be conducted in changing and challenging times, both politically and commercially.

Ardern was first up, saying New Zealand’s relationship with China is “one of our most significant and important. Our Comprehensive Strategic Partnership continues to provide a strong foundation for the relationship, and we remain committed to our one China policy.”

Previously at the summit, she had stated that:

Ardern added a fourth key message this time: Managing the relationship is not always going to be easy and there can be no guarantees.

“Given our two countries’ different histories, worldviews and political and legal systems, New Zealand and China are going to take different perspectives on some important issues (such as Hong Kong autonomy and treatment of ethnic Muslim Uyhgurs in Xinjiang).

“This need not derail our relationship; it is simply a reality. There are some things on which China and New Zealand do not, cannot and will not agree. We will continue to work through these is a consistent manner, as we have always done,” Ardern said.

“New Zealand is an open, pluralistic democracy with a focus on transparency and the rule of law. We take a principles-based approach to our foreign policy, and we make our decisions independently, informed by our own assessment of New Zealand’s interests and values.”

She said over the past year New Zealand has chosen to raise some issues with China in private; it made public statements with other countries in multilateral bodies such as the Human Rights Councils; and in other cases it chose to partner with Australia, United Kingdom and United States that share “our views and values. And sometimes we spoke out alone.

“As China’s role in the world grows and changes, the differences between our systems – and the interests and values that shape those systems – are becoming harder to reconcile.

“This is a challenge that we and many other countries across the Indo-Pacific region, but also Europe and other regions, are also grappling with.” 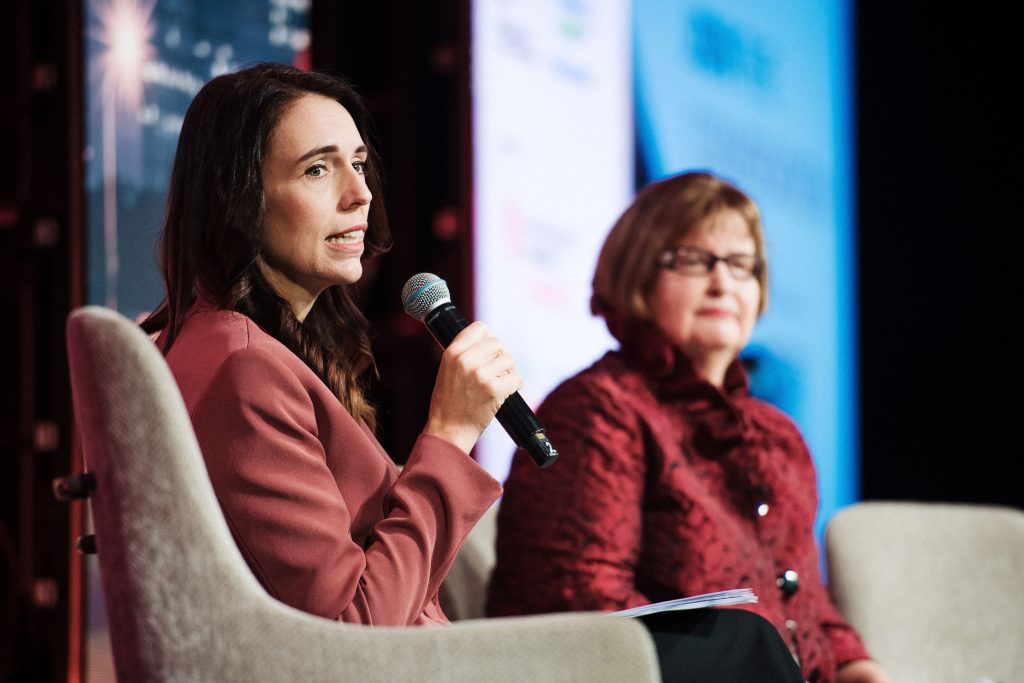 Ardern said economic considerations should not overcome the value-based relationship and “we will continue to navigate this. We will swim in the New Zealand lane as we always have. I consider myself to be the guardian of that independence. We have a proud history of that, and I don’t believe our position has changed one iota.”

China’s Ambassador to New Zealand, Wu Xi, told the summit that no matter how the international situation may evolve, China will remain committed to a path of peaceful development and pursuing mutual benefit and win-win cooperation with all countries, including New Zealand.

“Our two countries, different in size, culture and social system, have made history by achieving many firsts in our bilateral relationship. The fundamentals of our relations are strong.

“Instead of trying to change or remodel the other, we respect each other and I am confident that we will carry on this tradition.”

Wu said issues related to Taiwan, Hong Kong, Xinjiang and Tibet touch on China’s sovereignty and security, and “China stands ready to safeguard its core and major interests. There is no room for foreign interference on these issues.”

She said the national security legislation for Hong Kong does not impact the judicial independence or the high degree of autonomy; nor does it impact the rights and freedoms of residents or the legitimate rights and interests of foreign investors. “I am fully confident that the national security law will only bring about a more stable, prosperous and attractive Hong Kong.”

China is establishing Hainan as a free trade zone, and “as this plan unfolds, the business communities in both countries will find a lot of new opportunities. We should also explore the opportunity to leverage the potential of the Southern Link with New Zealand acting as a hub between Asia and South America.”

Wu pointed out that New Zealand’s exports to China in the three months to May were $4.45 billion, accounting for half of New Zealand exports to the wider Asia region and one-third of the APEC countries. China remains by far the largest export destination for New Zealand, and two-way trade has now gone over $30 billion annually.

Former Prime Ministers Sir John Key and Helen Clark backed New Zealand’s position on China, pointing out that New Zealand has always conducted an independent foreign policy and continued to have “upfront and honourable” dealings and dialogue with China.

Sir John said issues such as South China Sea, Hong Kong and Taiwan are not new – “they were around in my day. We have held a one China policy and respected China’s rights.

“If you sit back today and look at the global position on China, you would say that it has hardened, deteriorated and worsened. Should New Zealand blindly follow the direction of Australian and US foreign policy?”

He said the situation was largely due to the politics of Donald Trump and the United States. Trump wanted to measure his relationship with other countries via trade; he wanted a bogeyman he could hold up as to why things were wrong and why for his voters in the flyover states life wasn’t as good.

“So his argument was: ‘China didn’t play fairly and I’m going to change that’. He actually never did change things and from a trade perspective things actually got worse. That anti-China narrative had taken hold globally.”

Sir John told the summit that as Prime Minister he visited China seven times and was convinced that the country would emerge as a superpower. “Part of the vision was to have a good relationship with China, and it’s great that China wants to buy products and services produced in New Zealand.

“The reality is that China is going to be more important to New Zealand as it grows into the largest economy in the world. There are still 600 million people living in China on very low income and they want to buy what New Zealand produces.”

Sir John said there are ways of constructively working with China. He cited the example of Zespri gold kiwifruit rootstock being taken to China and now 54,000ha of the fruit is being grown there – illegally, in his view.

“Zespri is seeing whether some of those growers can be licensed and produce kiwifruit to the same quality grown in New Zealand and Italy. You will always have conflict (in bilateral relationships) but it doesn’t have to end badly. Instead, you look for creative ways to find a solution,” said Sir John.

Clark said New Zealand governments have been working since 1972 to build dialogue with China. “It’s simply nonsense not to recognise a country and government with a quarter of the world’s population.”

She was staggered by comments out of Australia and United Kingdom that suggested New Zealand had turned its back on its traditional friends – following Foreign Minister Nanaia Mahuta’s statement that New Zealand was uncomfortable using the Five Eyes intelligence network (Australia, Canada, NZ, US and UK) for messaging around human rights and China.

Clark told the summit that the comments were uninformed and a slur on New Zealand. Any expectation that Five Eyes came with an obligation to formulate a coordinated foreign policy position was a huge leap – it was designed solely as an under-the-radar intelligence sharing cooperative – and was a significant infringement of New Zealand’s sovereignty.

“We have been living in a period of heightened geopolitical tension and New Zealand needs to have the self-confidence to stand its ground and not be pulled into jousting over its China relationship. It is a large, strategic and very valuable relationship for us,” said Clark.

2022 has been a stellar year of reconnection for New Zealand businesses. After two years …